The 1957 GMC Stepside is a casting by Matchbox that debuted for the 2010 mainline. The casting had a number of MB786 and was originally produced from 2010 to 2014 when it was discontinued. The casting was retooled in 2015 with the plastic bed being cut partially with a metal bed for easier assembly and budget restrictions. The casting now has a number of MB985 and resumed production ever since. This version of the casting formed the basis for the plastic body metal chassis version for the Color Changers series with a number of MB1066 and was in production from 2017 to 2019 when it was discontinued as well.

The 1957 GMC Stepside has come out in the following 1/66 scale versions: 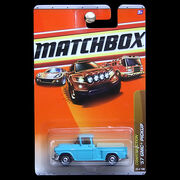 2019 carded 1957 GMC Stepside
Add a photo to this gallery
Retrieved from "https://matchbox.fandom.com/wiki/1957_GMC_Stepside?oldid=92636"
Community content is available under CC-BY-SA unless otherwise noted.