There was also a Crown Firecoach Snorkel, but it never made it past the pre-production stage.  It did appear in the catalog for that year, though. 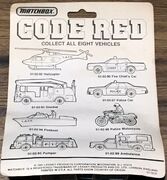 Rear side card
Add a photo to this gallery
Retrieved from "https://matchbox.fandom.com/wiki/Code_Red?oldid=64223"
Community content is available under CC-BY-SA unless otherwise noted.