Matchbox Cars Wiki
Register
Don't have an account?
Sign In
Advertisement
in: 2009 Matchbox, Ready For Action, City Action,
and 16 more

You may be looking for the earlier Routemaster casting, released first for 1961 as London Bus (5-C), or the 1965 Routemaster Bus (5-D) casting.

The Double Decker is a casting by Matchbox; a bus model is based off of the iconic AEC Routemaster, that debuted for the 2006 mainline.

The Double-Decker is given out to every single person who holds the title of Matchbox Ambassador To Collectors, a program that started in 2006 until it was discontinued after 2016.

Despite that, the casting has reemerged in 2021 as an exclusive vehicle on the Matchbox® Collector site.

This is a large model for the mainline series, at 1 5⁄8″ tall and 3 1⁄16″ long long. The body consists of two metal castings, at the expense of an interior; the steps seen at the rear of the bus are part of the base. A single piece of plastic accounts for all of the windows.

The Double Decker has been issued in the following scale versions: 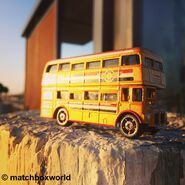