It was retooled in 2015, for easier assembly. The separate metal cab became part of the plastic body while retaining the metal chassis. The casting now has a number of MB944 and was in production from 2015 to 2018 when it was discontinued as well.

In the midst of a hazardous situation, the brave heroes of the San Luis Obispo City Fire Department use the '08 Ford E-350 Ambulance to transport paramedics to the scene. Whether it's a high-risk SWAT operation, or a raging wild fire, the reliable '08 Ford E-350 will always be close to the action! 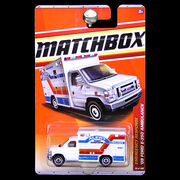 Retrieved from "https://matchbox.fandom.com/wiki/Ford_E-350_Ambulance_(2009)?oldid=97364"
Community content is available under CC-BY-SA unless otherwise noted.