The GMC School Bus is a casting that debuted for the 2009 mainline. The casting had a number of MB768 and originally produced from 2009 to 2013 when it was discontinued.

It was retooled in 2015 as the original construction was a metal cab with the rest being plastic until it became entirely plastic. The casting now has a number of MB998 and resumed production ever since.

The GMC School Bus has come out in the following versions: 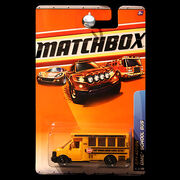