The Matchbox Ice Cream Van is a generic realistic model designed to resemble a real ice cream van. It was first released for the 2009 Matchbox mainline under the City Action series with "Cosmic Ice Cream" graphics. The model was originally produced from 2009 to 2013 when it was discontinued. It returned in 2019, retooled for easier assembly. The former metal cab and plastic body was merged to become fully plastic. The casting has resumed production ever since.

The Ice Cream Van has come out in the following versions: 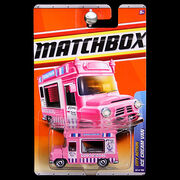 Add a photo to this gallery
Retrieved from "https://matchbox.fandom.com/wiki/Ice_Cream_Van?oldid=89567"
Community content is available under CC-BY-SA unless otherwise noted.