The Mercedes-Benz (2018 Series) was released in 2018, exclusively sold at Walmart retailers. The line consists of 1 case assortment of 5 cars instead of 6 and a 5 pack. All castings with the exception of the new casting have been released in the Matchbox mainline and are not new to the series.

The 6th car, a new casting; ‘14 Mercedes-Benz G-Class G 550 was not produced as a single, as the casting was delayed and eventually released for the 5 pack. 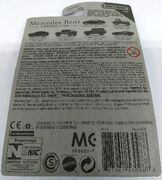 Mercedes-Benz 5 Pack (2019).
Add a photo to this gallery
Retrieved from "https://matchbox.fandom.com/wiki/Mercedes-Benz_(2018_Series)?oldid=92934"
Community content is available under CC-BY-SA unless otherwise noted.