The Mitsubishi Lancer Evolution X Police (2010) is a casting that debuted for the 2011 mainline. It has been produced as MB808 ever since.

The Mitsubishi Lancer Evolution X Police (2010) has come out in the following 1/64 scale versions: 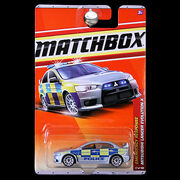 Retrieved from "https://matchbox.fandom.com/wiki/Mitsubishi_Lancer_Evolution_X_Police_(2010)?oldid=93090"
Community content is available under CC-BY-SA unless otherwise noted.