The Pierce Velocity 100ft Aerial Platform is a casting by Matchbox that debuted for the 2010 Real Working Rigs line. It is similar to the Pierce Quantum Aerial Ladder truck (RW003), with which it is often confused. The casting has a number of RW015 and was originally produced from 2010 to 2013 when it was discontinued. The casting returned to the Working Rigs line in 2019 and resumed production ever since.

The Pierce Velocity 100ft Aerial Platform has appeared in the following liveries: 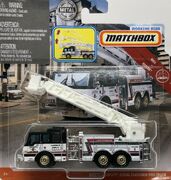