The Porsche 911 Turbo is a casting by Matchbox that debuted for the 2002 mainline. The casting has a number of MB544 and originally produced from 2002 to 2017 when it was discontinued.

The Porsche 911 Turbo has come out in the following 1/58 scale versions: 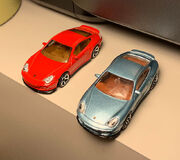 Side view of the 2017 Open Road Cruisers 5 pack

Back side view of 2017 Open Road Cruisers 5 pack version
Add a photo to this gallery
Retrieved from "https://matchbox.fandom.com/wiki/Porsche_911_Turbo?oldid=92641"
Community content is available under CC-BY-SA unless otherwise noted.