The Subaru SVX has been issued in the following versions:

The Subaru SVX is based on Ryu Asada’s SVX. Asada is a former Matchbox designer who owned two of them when he was in college. This casting would mark the last time he would design for Matchbox, as he passed away in 2021.

The 2021 recolor in metalflake red is dedicated to the late Asada, and a special logo with his name, the character meaning joy ('喜') in kanji and the Japanese Matchbox logo is visible on the card and on the "Power Grabs" box.[1] The model itself features a rear license plate which reads "ASADA." 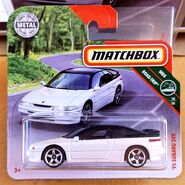 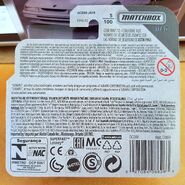 Base (plastic) details plus base code 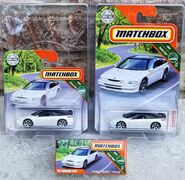 Power Grabs box for 2021 1-100 version. The logo dedicated to designer Ryu Asada is visible on the left.