Superfast has had at least two distinct meanings in relation to Matchbox toys. Originally, it referred to the then-new type of low-friction wheels fitted to Matchbox range models from 1969. This was the response by Lesney (the original producers of Matchbox toys) to models produced by new rival Hot Wheels. Later the term was applied to a range of special edition models, given extra detail and fancier packaging.

The original Matchbox toys possessed thin, solid, disc-like wheels on heavy axles. These wheels were durable and (fairly) realistically proportioned to the car, and were simple to make, but they generated a lot of friction and the toys were not very fast.

When Hot Wheels (then a separate company) were introduced in 1968, they featured wider wheels on a thinner axle. The wheels were a made from a low friction plastic, and the axles were polished to further reduce friction; a much faster wheel set that created a much faster car. Sensing the play value of these faster, albeit less realistic models, Lesney created the Superfast series, using the same types of wheels as Hot Wheels had.

Initially, Superfast wheels were about as wide as the older wheels (now called "regular wheels"), keeping the wheel fairly realistically proportioned to the rest of the vehicle, and allowing Lesney to reuse their current castings with only minor changes to the base. These early Superfast wheel sets were relatively fragile, however, so Lesney increased the wheel width within the limits of their then-in-use castings.

Lesney had essentially been caught with their pants down, though, and had to compromise between their castings, which had been designed to accept regular wheels, and the Hot Wheels-style wheel set, which needed a wider wheel to be durable. The castings simply didn't allow enough room for a full-width Hot Wheels type wheel, so middle period Superfast wheels were about half of the width of today's wheels. 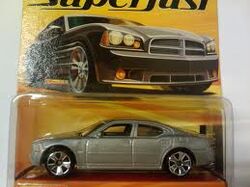 More recently, Matchbox has used Superfast to designate special editions of mainline vehicles, typically given extra-detailed paint schemes for added realism (e.g. painting of headlights, riding lights, license plates). These Superfast vehicles are packaged on a blister card, like other Matchbox vehicels, but also include a box, reminicent of the boxes Matchbox toys used to be sold in.

Additional series further divide the Superfast series, such as Superfast America; Superfast Tin Collector 2004, which featured Spectraflame colors; Best of British; Euro Edition; Lesney Edition and others. In 2009, to celebrate the 40th anniversary of the original Superfast, a special edition of the Volkswagen T2 Bus was offered by mail-in.

In 2019, the Superfast line was brought back for the 50th anniversary of Superfast. This kept the extra detail and realism on the car from the Special edition Superfast. It added the feature of rubber wheels, now. This revamped Superfast line brought some new cars to the Matchbox lineup like the '18 Land Rover Range Rover Vogue SE, '04 Honda S2000, and the '16 Chevrolet Corvette as well as other cars from the mainline turned into Superfast. This new Superfast continued into 2020, until it changed it was renamed to "Matchbox Collectors" in 2021. A 'gold edition' was also added for the 50th Anniversary of Superfast which was added as mainline cars that were painted gold. This was a Target exclusive.